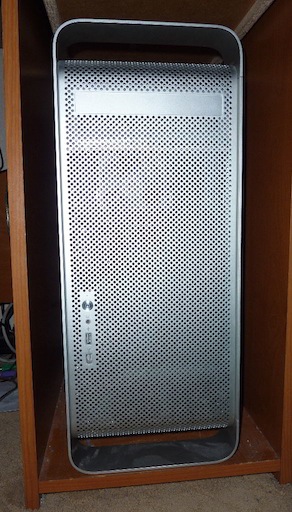 I was curious to know the performance of Bitcoin mining on a PowerMac G5.  Let me say that if you are mining Bitcoin using a CPU, you're probably doing it wrong, but I like to experiment and had an extra G5 sitting around to test.  Mining with GPUs is much faster, costs less to mine per watt and is therefore, more profitable.  There are now dedicated Bitcoin mining machines that blow away GPU mining so this too will become a thing of the past.

After searching long and hard, I couldn't actually find any information on mining performance a a G5 or a comprehensive tutorial on how to set it up for maximum performance.  This Bitcoin mining hardware comparison list shows mining performance on G3 and G4 processors, but not a G5 processor.

INTERESTED in REAL MINING? Check out my post - Mineral Rich - Gold/Silver/Copper Ore Samples from Nevada Mining Claims Available for Sale or if interested in Buying & Selling Bitcoin and Litecoin, signup with Coinbase.

I'll explain how I got it working in a minute, but first on to the performance numbers.

Using CGMiner version 2.11.4 on a PowerMac G5 dual 1.8Ghz computer running Mac OS X 10.5.8 I got performance of only around 800 Khash/s combined between both processors.  Even for CPU mining this is terrible.  I thought there had to be another way to increase performance since one of the features of the PowerPC G4 and G5 architecture was Altivec which is additional instructions built-in to the CPU to provide enhanced graphics performance.

The problem was that initially I could only get CGMiner compiled for CPU mining using C and Cryptopp as the hashing algorithms.  I figured that if I could enable Altivec, I could get better performance.

After a lot of work I figured out how to get Altivec compiled into CGMiner as a supported algorithm and it had a big effect on performance.  With Altivec, the PowerMac G5 was showing performance of close to 2 Mhash/s or more than double the performance under the other algorithms.  Again, not great, but on par or slightly better than what I get with an iMac core 2 Duo Intel processor.

Here's what I did to get it to work.

* libcurl - download latest version here (this is required by CGMiner)

* CGMiner - download latest version here (this is required for actual Bitcoin Mining) By default CGMiner doesn't compile with CPU mining support so you have to configure with the flag --enable-cpumining . Version 3.0 and above of CGMiner source code no longer has CPU mining code so you have to use an older version or you can use BFGMiner as well with same settings.

I'm not going to go into all of the configure, make and make install commands, since I don't recommend wasting your time.  However, if you are so inclined to get CPU mining working on your PowerMac G5 read through the comments to see if any of the posts can help. I no longer have access to a G5 so personally can't help much.