Locking in Customers without a Long Term Contract

Cell phone companies are notorious for locking in customers to a long term contract (usually two years).  They do this so they can provide cheap handsets.  Sometimes, consumers may find their cell phone service lacking after signing a contract, but must stay put or pay high termination fees.  When newer phones hit the market, upgrading is usually not an option either since they must fulfill the term or renew for another two years.

I've always thought that if you provide a great service at an affordable price, there's no reason for customers to leave.  It's perfectly fine to subsidize handsets, but why not offer the customer the option to pay a higher price for a phone that can be used on various networks?  The cell phone companies could simply offer a higher phone price, higher monthly price or a combination thereof instead of the lock-in two year agreement.  If you don't have the money to pay full price for a phone, then you can lower your phone cost by signing a contract.  Such multiple convenient choices aren't usually options.

To solve exactly the problem described, a number of carriers have entered the prepaid phone service market.  In case you aren't familiar with prepaid service, it's where you pay in advance for either minutes or account credits to be used toward phone and data service.  Once a certain period of time passes or you use all of your credits, more must be purchased.  You have the option to continue, switch providers or stop using the phone.

There are a few flaws with the prepaid model, however.  Typically, the latest phones with the best features aren't available leaving a selection of inferior phones and data services can get very expensive.  The various prepaid plans can have catches such as only a certain number of days to use credits that have been purchased or daily use fees which can make prepaid very expensive.

When I finally decided to get a cell phone, the prepaid model seemed to work best.  Since I rarely have the need to talk on a cell phone (landline is still my preferred choice), it didn't make sense to pay a lot of money per month for the rare occasion I'd make a call.  The phone was mainly used as a pager for emergency situations related to automatic notifications I would receive via text message if a server had a problem.

Unfortunately, the prepaid provider I chose was not financially stable.  After several months using that provider, they went under.  I was stuck with prepaid service I couldn't use.  A new provider took over the existing customer base and provided some credits on their network as part of the switchover, but I still lost some money.  Maybe a year or so after that, the new provider went under and the same thing happened allover again.  Fortunately, this time around I was able to dispute the charge on my credit card and recover some of the money prepaid for the service.  The lesson here is that if using prepaid, don't buy too many minutes/credits too far in advance.

I continued to use the existing provider for at least another year without problems until there was a situation where I was receiving hundreds of text messages in a day due to a false server alarm.  Since I paid per text, my prepaid credits were eaten up pretty quickly.  This happened several times and I went through hundreds of dollars over the course of a few days.  Even though the false alarm notification problem was corrected, I knew it could get very expensive should this situation reoccur.

That's when I came across Virgin Mobile which brings me to my point of a prepaid service that is a great example of non contract lock-in.  They have several advantages over other prepaid service providers:

3)  Financially stable - they are owned by Sprint

5)  Service has been acceptable and pricing is very affordable with plans starting as little as $25/mo.

After using the service for more than 3 months now, it's looking like I made a great choice.  Although they've had some issues (being a new service) with the data network, overall service has been great during travels to both small towns and large cities.  In a pinch when I didn't have traditional Internet access, I was able to use the phone to check emails, login to websites and generally keep in touch with what was going on without having to use a regular computer.  The unlimited data certainly made that possible. 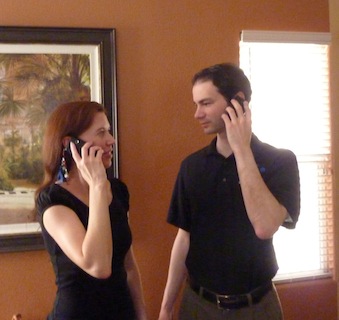 If you are looking for an alternative to the long term contract, Virgin Mobile may be a good alternative.  It doesn't have the iPhone or the latest Droid phones, but does offer a good value at a competitive price.  My wife and I are using the service and it's costing us the same for both of us as what it was costing us just for her phone under her two year contract which fortunately expired!

Here's the question for cell phone companies that want to lock people in.  Why not provide a great service, quality selection of phones and offer an affordable price?  That's your contract!