I recently took advantage of the holiday shopping season by purchasing my first tablet device intended not as a gift, but for myself. My past tablet purchases were iPads given as gifts. Even though having the first generation iPad and now iPad Air available around the house, I wanted my own. Tablets can certainly be shared by multiple people though they seem more like personal devices to be used exclusively by their owners much like smart phones. I rarely used the iPads because they weren't "mine."

I had upgraded my phone not too long ago to one with a 4.7" screen which was a significant improvement over the 4" screen on my previous phone. The increase in screen size was precipitated by the fact that I do most of my casual reading off blogs and news sites while watching TV after work and wanted something easier on the eyes. Now that there are phones with even bigger screens available I considered upgrading again. However it seems ridiculous carrying around such a large device while on the go when I don't do that much reading.

Having my own tablet would provide me with a better reading experience instead of reading snack print from websites on a relatively small screen. Long story short, I settled on an 8" Android tablet.

Here are my thoughts about the Lenovo S8-50 8 inch tablet:

I thoroughly enjoy it! It's super thin, lightweight and can be held in one hand while being navigated with the other. I went with Android because my past smartphones have also been Android devices so I was familiar with the user experience. Nothing against IOS and Apple products (I use a Mac daily).

The main reasons I went with the Lenovo tablet over Apple tablets is because it has better specifications than the more expensive iPad mini first generation, larger screen size than the latest generation iPad minis yet it's smaller than a iPad Air. The in-between size is ideal for my reading needs, web browsing, email and Twitter use.

I checked out the more expensive tablets including the offerings from Samsung and Amazon. The Samsung's got very hot with regular use and crashed often. The Lenovo runs cool and hasn't crashed on me yet. The casing is much thinner than the Amazon Fire and much lighter. At the sale price of under $160, it was a no brainer and is probably one of the best purchases I've ever made. 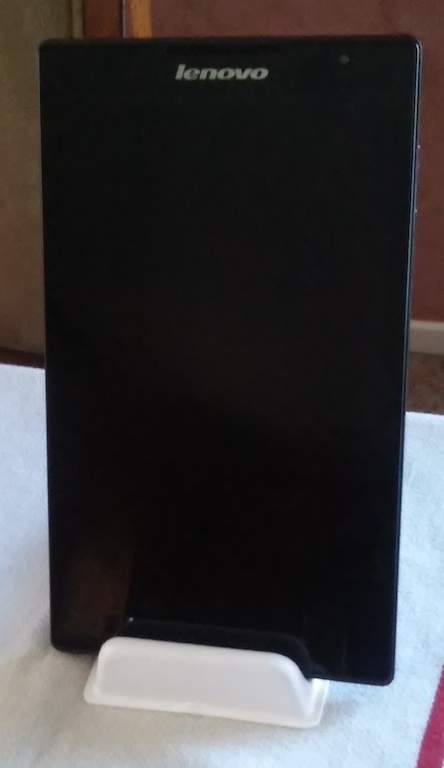 This post was written on the tablet. Full specifications can be found here.