From time to time I'll be presenting at various events, attending trade shows or signing books.  Stay tuned to this page to see where I'll be and when.  I hope to see you soon!

If you're interested in having me speak or present at your event or group, please contact me.  You can download my speaker profile (PDF format) for more information.

October 25th, 2012- Roadmap to Success: Online Marketing- The Magnet That Draws Customers to You- Henderson Chamber of Commerce- Henderson, Nevada

Photos from Past Engagements and Appearances 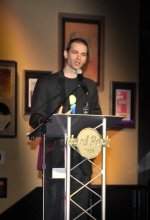 If you're interested in having me speak/present at your event or group, please contact me.  I'm also available for book signings and interviews. You can download my speaker profile (PDF format) for more information.